The wait is over. Sort of.

The move to Orange County is probably one of the longest moves ever measured in time. The company announced on their Facebook page on June 6, 2012 that they were opening two new locations. A location in Orange County and another location out of state. It is unknown what became of the second location because nothing was ever mentioned after that announcement. In December 2012 they announced they were getting close to opening but the Anaheim location had difficulty receiving construction permits which led to time constraints and their delayed opening.

The Anaheim location is at 2110 S. Harbor Blvd., (near Disneyland) Anaheim, CA. opened its doors on August 22, 2014. It is their seventh location. It is also the largest with seating for 250 people. Currently their daily hours are 8 a.m. to 11 p.m. Diane V. (last name withheld) of DV Marketing who handles all inquiries by the business, says by the end of the year their weekend hours will be extended to 2 a.m. on Fridays and Saturday. This will reflect the weekend hours of most of the other locations. “Anaheim is doing good.” said Diane.

The line was long the particular Sunday afternoon, I visited. I got one of the last two available parking spaces in their enormous lot. Many patrons were coming in and out, two of them wearing Mickey Ears. Their parking attendant was helping direct traffic in and out of the lot as it was a very busy time. I caught up with a group of 40 college students from Fresno State University who had just dined there. They were in Anaheim for a college event.

The large group waited less than an hour to be seated. They sectioned off into 5 smaller groups so the wait wouldn’t be as long. “It’s really nice in there and it’s busy,” said Dalena A. (who wished to have her last name withheld) This was her first ever visit to Roscoe’s and she said she was happy with the food. She ordered two thighs with potato wedges and cornbread. “I like how the chicken was crispy but I wish they had mashed potatoes” said Dalena A.

Another student, Severo Flores, who has several visits to Roscoe’s clocked under his belt, mostly at the Hollywood location, liked the look of the new location as he pointed to the two-story building. “It’s not as quaint and cozy feeling with these balconies.” said Flores. He ordered the Scoe’s #2, which is a ¼ chicken smothered with gravy & onions and comes with two waffles. “The food was delicious and what I expect from Roscoe’s.” 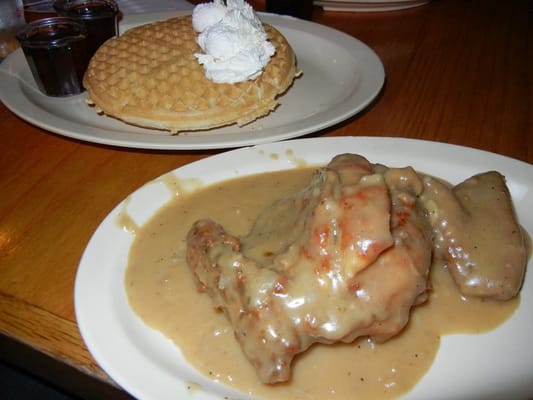 Scoe’s #2 meal from Roscoe’s House of Chicken and Waffles.

If you don’t like to wait in line for your Chicken and Waffles, the Anaheim location is currently hiring. Roscoe’s offers flexible schedules for students. If you are interested, you can email your resume to: me@dvmarketing.co.

“Roscoe’s is not like working at other restaurants, the culture is fun and vibrant, we get people from all walks of life including a lot of celebrities that come to our restaurants.” said Diane.