Issues is a band that was formed in 2012, in Atlanta, Georgia under the Rise record label. Members of this band include: Tyler Carter (clean vocals), Michael Bohn (unclean vocals), Ty Accord (turntables), Skylar Accord (bass guitar), AJ Rebollo (guitar) and Joshua Manuel (drums). They currently have two albums out with their latest one just being released on Feb. 18. Along with those albums they also have songs on the Pop Goes Punk series.

The crowd that showed up for the Issues set was unbelievable, there was even a point in the set where Tyler Carter addressed the crowd as being the biggest one that they have ever preformed for and then proceeded to thank each of the fans for coming out and showing their support.

Issues played on the indoor stage at the Self Help Festival and it felt like the entire room was packed. Everywhere you looked there were people and these people were not just standing there, they were doing everything but that. They were moshing, they were dancing, they were singing along and even more importantly they were having a great time.

“This has been my 3rd time seeing issues live, the first time I saw them was at Chain reaction when they were first starting out, then I saw them last year on the Feel This Tour with Sleeping with Siren, and then now,” said Jackie Newcomb, 21. “Every time I see them they just keep getting better and better. I think that they are a band that I will never grow tired of seeing perform live.”

“Michael Bohn is my inspiration to see someone who has a disability go up on stage time and time again, it’s just truly inspirational,” said Christiana Phillips, 20. “He has taught me that no matter the circumstances or the cards you are dealt with that you can still achieve great things and you can still achieve your dreams. It was amazing to watch him and the rest of the band do what they love to do, and that’s make the fans happy.”

“This was my first time seeing Issues live and I just have to say that they put on one sick show and are way better live,” said Ashlie Kilpatrick, 26. “I can not wait until they have their own headlining tour and come back to California.”

You can catch Issues playing in a city near you on the Vans Summer Warped Tour. In addition to Issues playing, fans also have a special treat with Ty “Scout” Accord confirming that he will be having a DJ set on the Warped Tour as well. 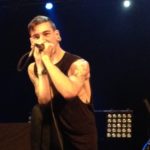 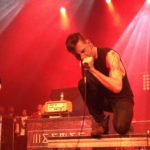 Michael Bohn really getting into the song. Michael Bohn taking it all in. 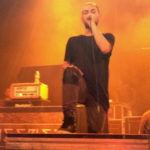 Tyler Carter singing his heart out. 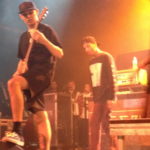 Tyler Carter with Joshua Manuel on the drums. AJ Rebollo on the guitar. Just a small amount of the crowd that was gathered for Issues.